Are you one of those who cant understand why people hike for hours , just for a view? I am one of them.

So , when Tigress wanted water as an element for her birthday, I got thinking .After many google searches , I finally found what I thought could be a winner .Boy , was I not wrong .

My adventure started with a call to Chen , from sarang by the brook . He was very ” on the ball” and kinda understood my ” I have zero stamina , I don’t exercise but I want to feeeeeeel nature ” plan.

I must say, he wasn’t one of those who wanted to make a quick buck , he initially told me that he would tell me how to get there and I could do  it for free , on my own. ( seriously dude!!) . I wasn’t prepared to get into the jungle for the first time , all by myself , trying to sniff my way towards a waterfall.

So , after a few more corresponding whatsapps , we were ready to kickstart this birthday adventure . To tell you the truth , I was a little apprehensive considering I haven’t done anything like this before.

We left KL at about 9 :30 am , on a glourious sunny weekday.With the help of Waze, we reached there within an hour five minutes. Slow drive , admiring the scenic route , catching up on all our girly gossips .

Reached sarang by the brook at approximately 10 :35 am to be greeted by Amie , who advised us on emptying our bladders at their hotel, because there aren’t any toilets in the wildnerness. They have a container hotel , by the way.

With Amie and his back pack , we drove for about 10 minutes .At this point , I already knew it was a start of an amazing few hours with my best buddy . Parked my car , at what looked like the middle of nowhere and started our “lazy” adventure. We trekked for about 25 minutes , on I must admit a very do-able trek and then, reached paradise.

A spot , with not a single soul , an orchestra consisting of leaves rustling, water gushing and insect and bird-y conversation . We felt like we found heaven on earth. And this was the part , I understood why people hike just for a view .It almost felt like I was in the middle of a Discovery Channel episode ,streaming live. 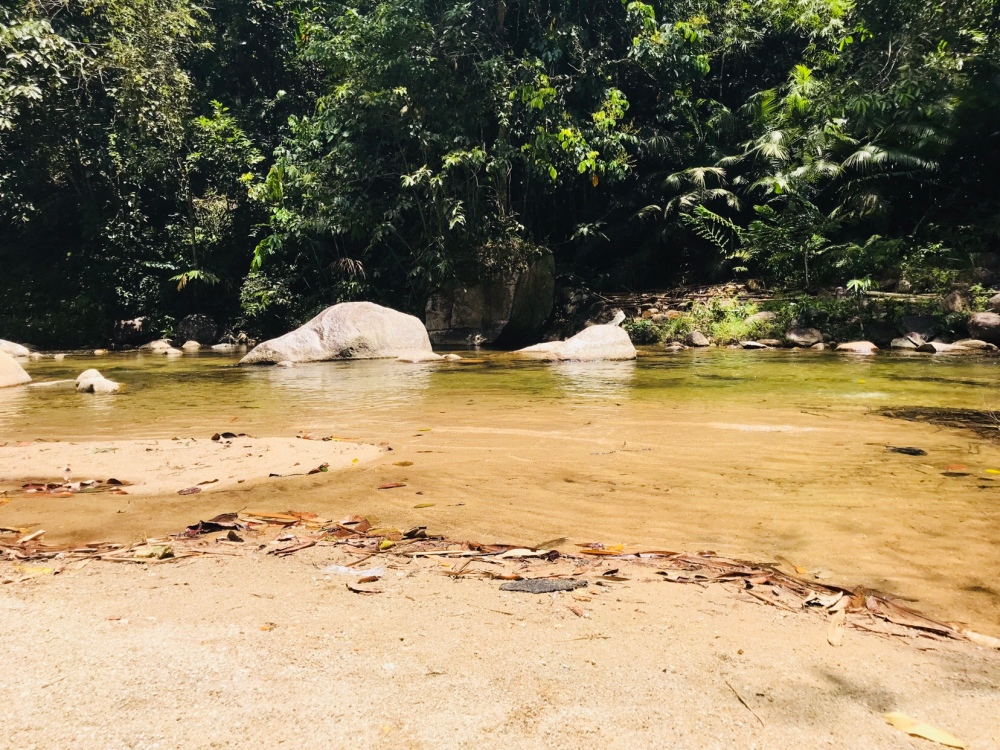 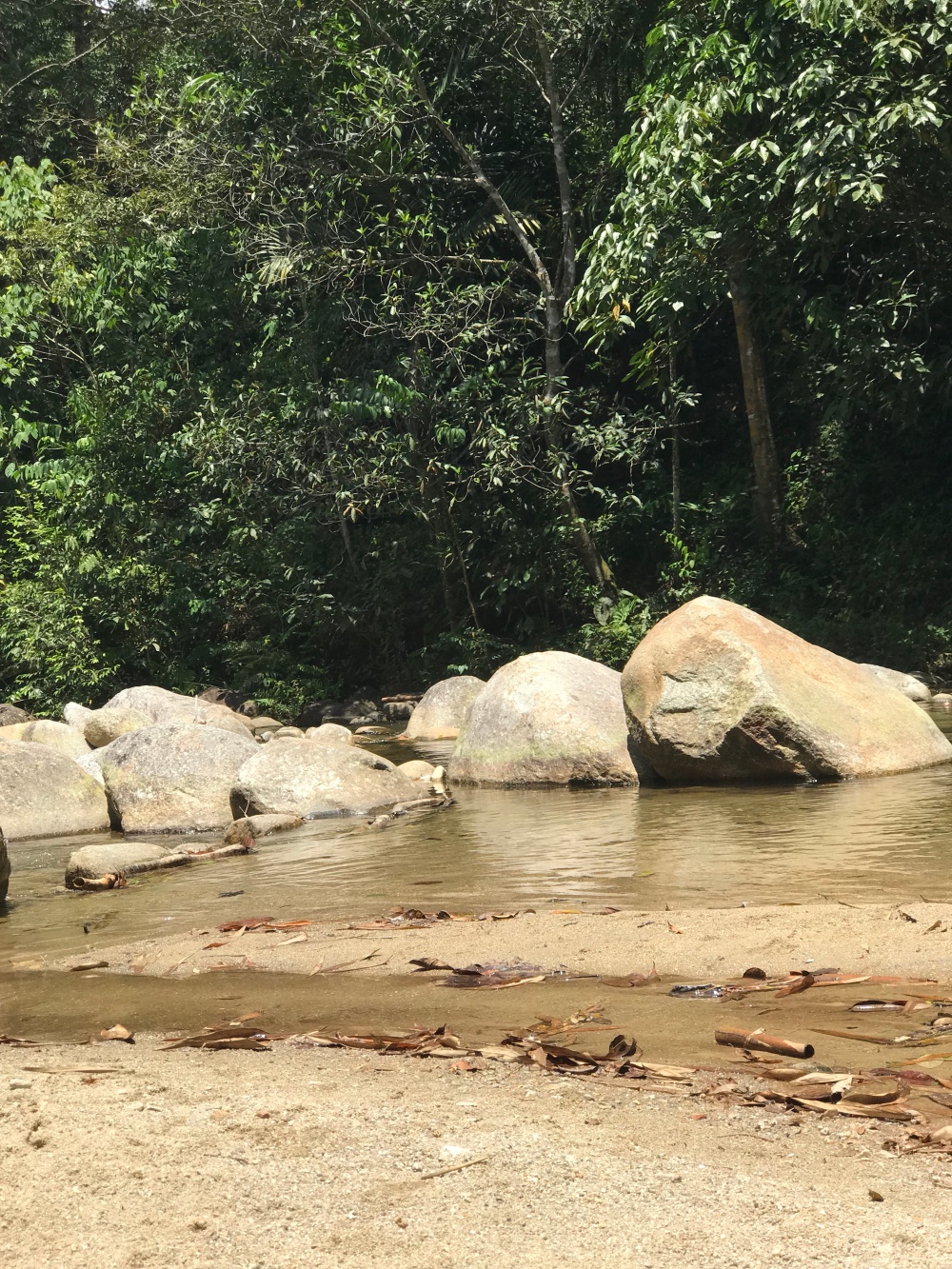 Amie , not only was he friendly, fun , he was also our personal butler.He set up our picnic mat, got water boiling , set up a camp fire while we were in the water .We had music playing in the background. It took us less than  a minute for our body’s to accomodate to the freezing water . And that’s how we spent the next 3 hours . We swam , walked right into our personal waterfall , that felt better than a hydro spa.

Our lunch was served. Nasi lemak bungkus , chicken burger from the BBQ pit and KKB’s famous kaya puff. He even had the water boiling , in case we wanted coffee or Milo. We felt so pampered. 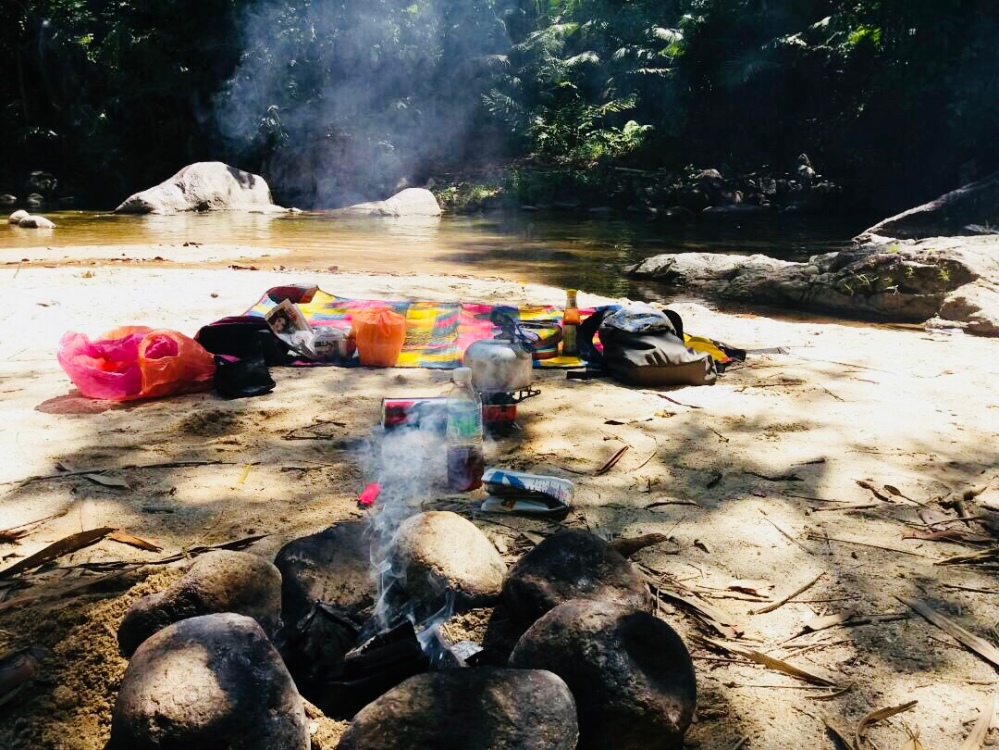 NOW , the important point, the reason why you book with Chen / Amie , is because they generally love nature , and love giving their customers real life experiences. He was in no hurry for us to leave , despite us wanting to go back in fear of the dreaded Friday traffic   . He insisted we stay on and enjoy nature ,unplug and immerse ourselves away from our phones , even suggested we take a short nap .He offered to set hammocks for us . In a world of such greedy businessmen, here is Chen and Amie who clearly are in the businesss to make you fall in love with nature . As we packed up , he took the trouble to clean EVERY single bit of rubbish , not just our rubbish but whatever was left behind from everybody else’s from past days.

If you want to switch off , get immersed in nature while being treated as royalty , seriously look into http://www.sarangkkb.com

They even have BBQ nights with amazing accommodation , at very affordable rates .And of course , for the more sporty , they have 4-5 hour treks for you too, apparently nicer views up there .

So glad I found Chen on TripAdvisor , by chance .It was the best 3 hours I’ve had in a long time .I will be back , this time maybe for white water rafting , the night trek and to stay in a container .